Options in the World of Work 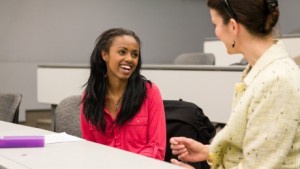 When Rahel Tafese spent a day shadowing a sales representative for a company called BioRx, she learned a lot about treatments for immune deficiency, but more importantly, she made connections that will help her as she figures out what path she will take within the health professions.

Tafese, a first-year student from Maryland, participated in Wake Forest’s new job shadow program with Wake Forest alumni offered through a course in the counseling department called “Options in the World of Work.”

“It was amazing,” said Tafese, who is thinking about majoring in health and exercise science. “Several of the physicians and pharmaceutical company representatives I met offered the opportunity for me to shadow them as well. Where else would I get that kind of connection?”

Forty Wake Forest alumni in North Carolina offered an insider’s view of their work to current students. On the flip side, alumni find out what it is like to be a student today.

“It’s a fun way to stay in touch with the Wake Forest family,” said Eric Hill (’88), who arranged Tafese’s visit to BioRx, the company he co-founded. “It doesn’t require a lot of effort to give a student access to a real business environment. I would encourage other alumni to do this.”

In addition to connecting students with sales representatives in the Winston-Salem area, he has offered to arrange for students to visit the company’s operations center in Cincinnati, Ohio.

“This program has been successful in more ways than we imagined,” said Department of Counseling instructor Heidi Robinson, who directs the series of College to Career courses. “Students are experiencing all different industry and career settings: consulting, sales, finance, education, medical practices. And, our alumni provide each opportunity.”

One student spent a day with a chaplain in an Iredell County hospital. Another shadowed an orthodontist. Robinson partnered with Lori Sykes, who works on the employer relations team in the University’s Office of Personal and Career Development (OPCD). Wake Forest’s Alumni office helped recruit local alumni to participate.

“Job shadowing opens up possibilities,” Sykes said. “It opens a student’s mind to hear from an alumnus who received a history degree, but works in private wealth management. Making that connection to someone who has been in their shoes before can make a huge difference in how they see their future.”

For some younger students, who have no idea what career they want, just seeing a day in the life of someone in the work world is valuable. For others, who are already focused on a particular career, shadowing that professional either makes them confident about their choice or makes them take a broader look at what else is out there.

“Either way, it’s very beneficial for the student to do that earlier rather than later,” Sykes said.

Opportunities were listed in the OPCD’s recruiting system on a first-come, first-served basis. As soon as it was posted, Nick Syris signed up to job shadow Cameron Kent (’79), a news anchor for WXII-TV.

“I met everyone from producers, to the traffic reporter, the weather director, the sports director, to the people who run the station’s website and handle the technical aspects of the news station,” said Syris, a first-year student from Florida. “Three hours felt like three minutes. I loved the adrenaline rush I got from watching a show go live.”

Written reflection helps students understand the value and relevance of the job shadow. They process it. Each student submitted written reflections to Robinson addressing three questions: “What (they did)?” “So what?” and “Now what?”

For sophomore Abby Rogers, spending two days observing accountants in different roles from procurement to internal and external reporting, confirmed she had chosen the right major for her—accounting—and fueled her enthusiasm for the accounting profession. “Shadowing took me out of my comfort zone and forced me to ask questions,” Rogers said.

At the end of his day shadowing Kris Downing (’93 MBA), director of business strategy and partnerships at the Center for Creative Leadership, Grey Miller was invited to apply for a summer internship. Miller is a sophomore from Morganton, N.C., who plans to major in communication with a minor in entrepreneurship.

“For me as an alumna, I found it refreshing to spend time with a college student and I had a renewed sense of pride in the work I do,” said Downing, who gave Miller the chance to sit in on research meetings and a conference call with a potential client. “It was very rewarding to share a portion of my day with an attentive, interested Wake Forest student.”

When students are home during summer break, they can feel confident seeking opportunities on their own, Robinson said. “All this experience will translate into being better prepared and making better decisions when it is time to choose a major, select courses, and, of course, once it’s time to interview for that internship or full-time job.” 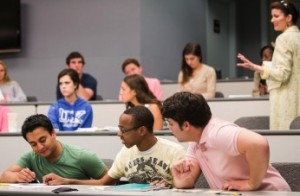