It only took an airplane, a train, half a dozen maps, two classmates and a sense of humor to arrive safely at The Flow House in Vienna, where I would diligently study caramel gelato…oops, I mean, several of the leading theorists in counseling, for the next two weeks. 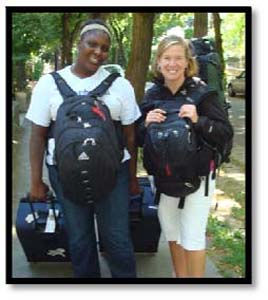 Was there really a Steinway piano in the living room? Are eleven women sharing this one bathroom? Is our fearless leader, Dr. Debbie Newsome, going to come up with a plan to get us to show up for class each morning, when there are thousands of distractions calling to us from the city? Well, yes, yes and of course.

Tucked away, inside the conference room of The Flow House, we investigated the lives and works of Alfred Adler, Sigmund Freud, Jacob Moreno and Viktor Frankl through class discussion, student presentations, personal reflection and guest speakers. Outside the house, the paths we navigated and the historical sites we explored became our classrooms, sans PowerPoint. A class visit to the late Viktor Frankl’s home was a memorable one, which included a tour of the quarters led by his wife, Elly Frankl.

Appropriately accompanied by a cold and steady rain, a bus ride took us along the flooding Danube to Mauthausen Concentration Camp, where Viktor Frankl and hundreds of thousands of others suffered an unimaginable existence under rule of the Nazi regime. Later, on this same day, we arrived at the entrance of Melk Abbey, where the rich, Baroque architectural splendor of this monastery stood in stark contrast to the concentration camp we

visited only hours before. This type of juxtaposition can be found permeating our lives, our neighborhoods and our c

ountries if we’re willing to search and brave enough to 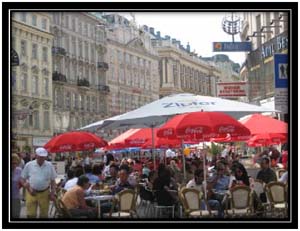 Excursions to several art museums were enjoyed after class dismissal in the afternoons. The Leopold Museum, which is part of a vast cultural complex, named the Museumsquartier, holds the works of some of my favorite artists of the Vienna Secession movement, Gustav Klimt and Josef Maria Auchentaller. These moments experienced in the presence of such spectacular creation provided the perfect atmosphere for the serious, wild day dreamer.

On an evening in the middle of our stay, several classmates and I optimistically hopped on a U-Bahn headed for the State Opera House, in hopes of securing leftover seats for student prices. We were in luck, and paid only a fraction of the cost for our most impressive seating arrangements to see the grand opera, Faust. The spirit and energy of this night will be remembered and treasured forever.

Time was also spent meandering through the city markets tasting dried fruit, drinking coffee and trying to take in the culture of the city. Often, I had to put my 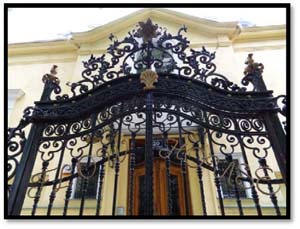 camera down and remind myself to enjoy the experiences as they were in a particular moment without the distraction of taking photographs.

I am eternally grateful for this opportunity to travel and study with my classmates, professors and friends in Vienna, Austria. Inspired by the city and forced out of my daily routines, this luxury of travel and exploration has offered an experience that I will carry with me for a lifetime.